How you can help stop the killing in your area / Home

vs Mayor Dinkins vs Health Dep't. vs Transit Authority vs Housing Authority 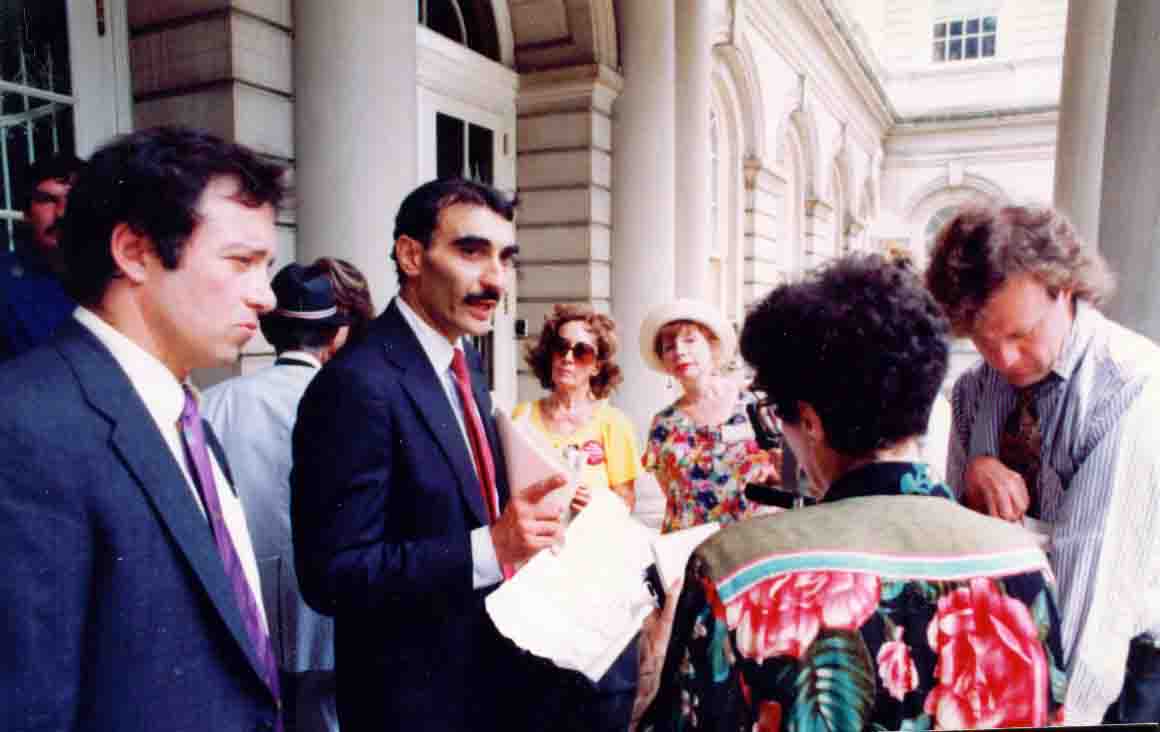 A historic moment in time caught on film. This was the day Dr. Margaret Mead's prediction came true. "A few, determined, well-organized individuals can change the world." This was the announcement of our law suit against the Mayor of the City of New York, our very first law suit, which we won.

WE WON THE DOCUMENTARY EVIDENCE IN COURT !!

The first place to start was with the Mayor's Office and the second was the New York City Health Department. The Health Department had the discretion to solicit bids for any type of service it deems necessary to purchase to protect the Health of New Yorkers. A logical step was to make numerous Freedom of Information Law requests about the animal killing contract with both offices for their files going back 20 years. We were surprised that both the Mayor's Office and the Health Department refused to comply with the Freedom of Information Law and gave us documents which were heavily crossed out. Thick black lines were drawn through all the important details. The only way to get the information getting covered up by the black lines was to sue both the Health Dep't. and the Mayor's Office in State Supreme Court. But how could our group of half a dozen dog and cat rescuers afford major law suits against government agencies? We could barely afford our own rescues. It became clear right at the outset that we would have to dedicate one of us to learn how to do law suits. I was the only one willing to take this most difficult task on.

I began spending days on end at the law library. After several weeks I had found enough templates of sample legal papers in the books to be able to start drafting legal papers. Once they were completed, after reviewing them over and over again, I was ready to spend the $250 necessary to file a Supreme Court law suit against Mayor David Dinkins. The picture above is of our anouncing our first law suit, against the Mayor, on the steps of City Hall. What happened you ask? The Judge assigned was an older gentleman named Burton Sherman. Upon approaching his bench he lookes at me with a frown and said "What is this about, animals?"I responded "well, your honor, not really, it is really about the Mayor's office failing to comply with the NY State Freedom of Information Law and crossing out important details from documents we are entitled to read." Judge Sherman responded "I hate animals." I shuttered at what he had said and thought to myself, "now I have to learn to do an appeal because this jerk is also going to ignore the law." He then asked me "you are a lawyer?" I said "no, sir." The Judge said "I will render my decision within 90 days." At the time the picture below was taken we had just come out of this oral argument. One month later Judge Sherman's decision gave us our first victory in court, which was to be the first of approximatley a dozen legal wins in a period of six years. Unfortunately, the Mayor's Office did not comply and refused to turn over the details on the papers. How could he get awaya with it you ask? Simple, apparentally, he is the Mayor of the City of New York. I had to make a motion, which required brand new legal research, brand new legal arguments, brand new legal paper work, brand new oral arguments , and another decision from the judge . One month later, after the new oral arguments, Judge Sherman issued another Order for Mayor Dinkins to comply with, under threat of arrest! Mayor Dinkins still refused to comply. I made another motion two months later, again requiring brand new research, paperwork, oral arguments, etc. Judge Sherman issued a second Order threatening to jail the Mayor of NY City. Can you believe Mayor Dinkins still refused to comply. Three months later I made a third motion and Judge Shermen issued a third Order to comply under threat of arrest. At this time I heard that John Murphy, the Corporation Council lawyer who was defending the Mayor, had resigned his position and that the case had been assigend tio a new rookie attorney with the City. He told me that the Mayor's office is simply refusing to comply and that shouting matches are going on all over the Mayor's office on what they should do. Finally, four months after I had won the law suit, Mayor Dinkins complied and I got the information which had been crossed out on the documents. And boy, was that information worth getting!

It had evidence of Mayoral inability to get the Health Department to do what the Mayor was ordering it to do with animal control policies. For instance, Stanley Brezenoff, a former 1st Deputy Mayor under Mayor Koch, had ordered the Health Department to implement the changes recommended by an audit done by then NY City Comptroller Jay Goldin. After eight years of giving Mr. Brezenoff excuses and telling him they were implementing the changes Mayor Koch's term had expired. Thus the Health Department had simply placaded the Mayor until his term was up and had in actuality not implemented ANY of the changes ordered by the Mayor. On another issue, that of collecting dog licensing monies, the Health Dept had told the Mayor that if they (the Health Dept.) collected the dog licensing monies instead of the ASPCA, which was doing the animal control for the city in return for collecting the licensing income, NY City would increase its intake from dog licensing by $750,000. When the Mayor had followed their advice and made such a change the city had not been able to collect a single dollar the year of the change and in subsequent years the city had collected $1.9 million LESS than the ASPCA had been doing. The documents were filled with examples of mismanagement, obstructionsim, and cronyism such as these.

We made copies of these documents and put a booklet together explaining the shenanigans and distributed copies of it to every member of the NY City Council. Later that year we made out first lobbying trip to Albany, the Capitol of NY State, again distributing these booklets to every member of the NY State Assembly and the NY State Senate. We made a second visit to Albany a few months later, distributing more such documents our continual research was uncovering. Then we filed a similar law suit against the NY City Health Department. Again, after many legal maneuverings and shenaningans we obtained more evidence of animals' lives being thrown away by the tens of thousands due to the worst types of human behavior. After one year of lobbying the NY City Council and the NY State Legislature we got our bill introduced first in the NY State Assembly by Staten Island Assemblyman Robert Straniere in March of 1993, and two months later in the State Senate by Queens State Senator Frank Padavan.

Within a year after that the ASPCA decided that it no longer wanted to do the contract killing for NY City so it could go back to its founding father's mission of preventing animal crimes. The reasons the ASPCA cided were hte one and teh same as we had been making in our lobbying campaign at the NY City Council and the NY State Assembly. Meanwhile, our bill, which was going to create borough-wide SPCAs to prevent cruelty, was on a fast track for passage, with over two dozen sponsors, and it even passed the Assembly Corporations Committee unanimously. However, having accomplished our goal, which was to force NY City to do its own killing so there would be criticsm of it and therefore bring about changes, we did not pursue passage of the bill and withdrew it. The purpose of our legislation had been accomplished. There was now going to a be a law enforcement agency again to prevent and punish animal crimes. The media, publid and political would be much more prone to criticize the city for running an Auschwitz style killing shelter, and we had put NYC on a path toward eventual major change. We accomplished with good sound strategy, tenacity, litigation, and lobbying what no one had been able to accomplish in 100 years! We did our own litigation and won every single law suit...over a dozen...with no lawyers!

It took 10 additional years, from 1995 until 2005, during which time a tumultuous period ensued with numerous television and print news reports about the horrors of NY City animal control services, for NY City to get it together. Although, Mayor Giuliani had done well in transitioning from the ASPCA to city operated animal control services, he selected inept and unqualified persons to head the new agency and the next 10 long years were lost. In that time period, as I stepped back to resume my life and go back to making a living and pay off the debts which I had amassed by doing full-time lobbying and litigation for seven years, others, encouraged by this first significant change in a century which I had brought about, formed new organizations to pick up where I left off. Gary Kaskel, an advocate of ferrets, formed the Shelter Reform Action Committee and Jane Hoffman from the Animal Affairs Committe of the NY City Bar Association stepped up to the plate, with the former putting enormous pressure with additional lawsuits and media coverage and lobbying and the latter with diplomacy and organizing a Maddie's Fund effort.

In 2005 NY City became the first big city recipient of a Maddies' Fund grant, which brought in $15 million over a 7-10 year period to transition NYC to low kill. The ASPCA then made a $5 million donation toward the same goal. North Shore Animal League began allowing the City's new animal control agency to use its fleet of adoption motor homes for adoption events in NYC Parks, with the cooperation of the Parks Department. The local television media took notice of the effort and news reports of the adoption events obtained publicity and became a huge success. NY City currently ships out of animal control 550-700 animals per month. In one year's time NY City has increased its adoptions by 150% and reduced its euthanasia by approximately 25%, the first time ever in this city's history. New York City now has the second lowest per capita euthanasia rate in the country....2.6 animals per 1000 residents. Only San Fracisco is lower at 2.5 animals per 1000 people. For a city of 7.5 million people as opposed to the population of San Francisco, which is only 750,000 , that is some accomplishment. But we are not stopping there.

Companion Animal Network administers this one of a kind life-saving program for New York City Animal Control with a staff of volunteers. Along with adoptions and spay neuters it has become a third way of reducing euthanasia rates. For more information on how this is accomplished visit Safety Net's website at www.718544pets.org. For any area to reach low-kill it MUST implement an intervention program. Feel free to contact us on how to start one in your community.